Color of E1 vs Computer Screen

I think I’ve mentioned this before, but cannot really find it… 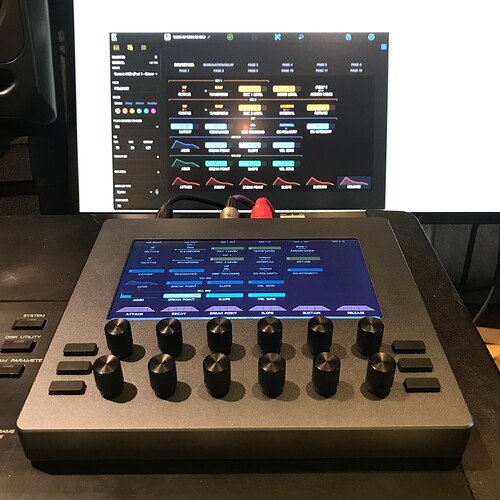 As you can see here in this example the difference is quite big. The E1 screen is way more blue than the rendering of the computer monitor… Where the computer rendition is nice and vivid the E1’s colors are weak, pale and too blue / cool. (Black background reads as blue)

Can this be addressed? I mean ideally I would love the E1 rendering to be more like on the computer screen color wise… Like way less blue?

the major impact here is how the colours are represented in E1 and computers. The computer graphics is based on RGB888 (24bits) while in Electra RGB565 (16bit) is used. Using RGB565 saves valuable memory resources. As the conversion of R,G,B components is not symmetric, it introduces colour shifts. I am not decided yet but mkII can possibly use RGB888 and some kind of colour correction could be done on mkI.

Thanks for your thoughts, @martin !

To me the main issue seems the blue color shift. If that could be addressed in at least the color representation (not necessarily the background) that would seem to go a long way… Right now Electra Red gives me something more in the way of Electra Magenta when shown on the E1 screen.

Part of the problem also appears to be the angle at which you look at the screen, as this makes a huge difference.

@jhh : That makes sense of course. But to me, maybe just because of the lack of solid colors on the E1 display, I perceive more of an issue with the foreground colors than the blue of of the background on the E1 vs the black of the background on the computer screen… It’s just when I see the fullness and saturation on the web editor I feel usually let down looking at the outcome on the E1… Yes, I hugely appreciate the functionality and of course the community here… But I feel the colors on the screen are visually not quite up to the same standards as the rest of the device…

depending on how much it irritates you, you could do a screen capture of the E1, then run that through an RGB888 to RBG565 converter and see if the result more closely matches what you see on the actual E1.

There’s a few tools out there in C/C++ and a couple in Python. There may even be some standard Photoshop/GIMP like programs that can export to RGB565 format. I did a quick look around, but can’t do actual download/install/testing here at work.