Quick question: There is a preset for the Korg EX-8000 that I might want to streamline in regards to the envelopes.
The Korgs of that time have a 6 value envelope: Attack, Decay, Breakpoint, Slope, Sustain and Release… Do any of the presets work for this or how is this done?

Marian Kalus’ preset is otherwise nice, it even has the option of patch request which is currently stil beyond my skill level…

The current Envelope choices within E1 are not really suited for Korg’s particular ALDBSSRL envelopes.

Currently, if I build a preset for korg (but is just my own choice), I decide not to use a graphical EG control, buy I typically create them with 9 controls like this:

The pad called “ADSR Mode” does the following when activated:

In other words it allows you to simplify the flexible Korg envelope into something more standard, but you can change at anytime back to the 8-control ALDBSSRL

Thank you, @NewIgnis! Makes sense… Of course as a visual person I love the graphical envelopes… Mmmh… Need to do some thinking… Or just use the preset as is… And make some music!

Ok. Here’s an image of the VCF envelope from the DW-8000 manual.

I was thinking that I could just do a bit map of the different sections and show them in their differing stages representing the shape of the envelope… That would work for the Attack. But for the others a “correct” graphical representation would need to include the info of the neighboring values to function properly… Mmmh…

It’s indeed a variation by Korg , and only a EG with 6 variables ADBSSR, but you’ll encounter the same principles. Mind you, Korg still has some others in use for Pitch EG’s which all bear the same challenges.

Ok. More thinking: Could I just make a bit map of all possible shapes of the envelope and then display it appropriately? Of course it would need to factor in all the input of all six fields…

Ok. More thinking: Could I just make a bit map of all possible shapes of the envelope and then display it appropriately? Of course it would need to factor in all the input of all six fields…

That would be like 127 to the power of 6 = 4 trillion potential combinations to make drawings for!
Even if you would only consider 5 possible values for each of the 6 controls, you still would end up with more than 15.000 bitmaps to make.

I wouldn’t go there…. 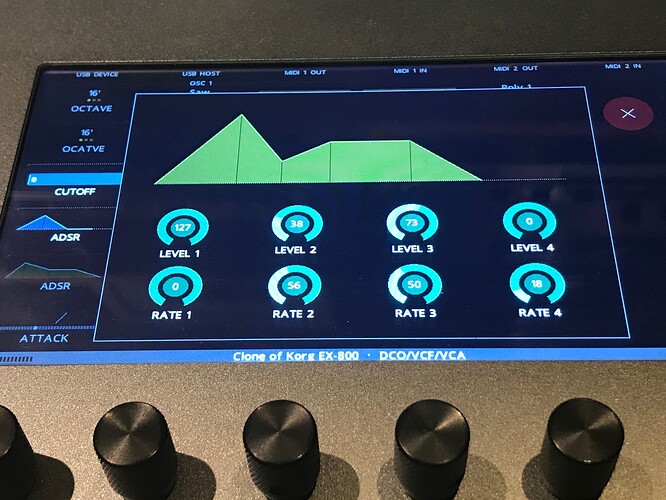 Looking closer at the new ADDSR envelope right now…
And I think it might have potential Level 1 would need to be locked at max, Rate 1 is the Attack time, but would need to be inverted… Will play with it later…

Exploring a bit more here… But having some issues understanding the setup properly…
Is there some documentation on this new type of envelope @martin?

I found to achieve the functionality I want Level 1 needs to be locked to 127 and Level 4 to 0.
Rate 1 is Attack
Rate 2 is Decay
Level 2 is Breakpoint
Rate 3 is Slope
Level 3 is Sustain
Rate 4 is Release

My two questions are now:

It seems there is something wrong with this function…

Here is a short video showing the issues I’m experiencing with the new ADDSR envelope.